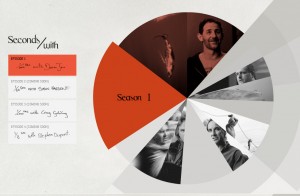 The first episode, “1/200 sec with Darren Jew” went live this week, and explores the story behind capturing my APPA award-winning image “Weightless”.

The “Seconds/with” series is one of the features of the all new Canon EOS Professional web portal. This portal, together with a strengthened Canon Professional Services (CPS) scheme, has been designed to deliver a new level of service and support to Canon’s Professional shooters.

It was unusual to be on the other side of the camera for the production of “Seconds/with”. Although I’d featured in a few kid’s and lifestyle shows on Australian TV over the years, nothing had reached this height of production with a large crew, multiple cameras and sophisticated lighting set-ups. Initially it was all pretty daunting, but the professionalism of the production team really showed through. They were able to get me into a comfortable space that allowed me to relax and have a conversation with the cameras.

Those cameras happened to be EOS 5DmkII, 7D and 1DmkIV, so the finished interview is not only the story behind capturing “Weightless”, but also a testament to the video capabilities of these models and the skills and talents of the filmmakers who had them in their hands and on their tripods and dollies.

The team from Leo Burnett Sydney that put the “Seconds/with” series together has been recognised at the 2011 One Show Entertainment Awards in Los Angeles, where “1/200 sec with Darren Jew” made the finals and received a Merit Award in the Film-Documentary Category being up against other big brands – Nike, Gatorade, Converse and Stella Artois.

You can purchase your very own Limited Edition print of “Weightless” on-line today.