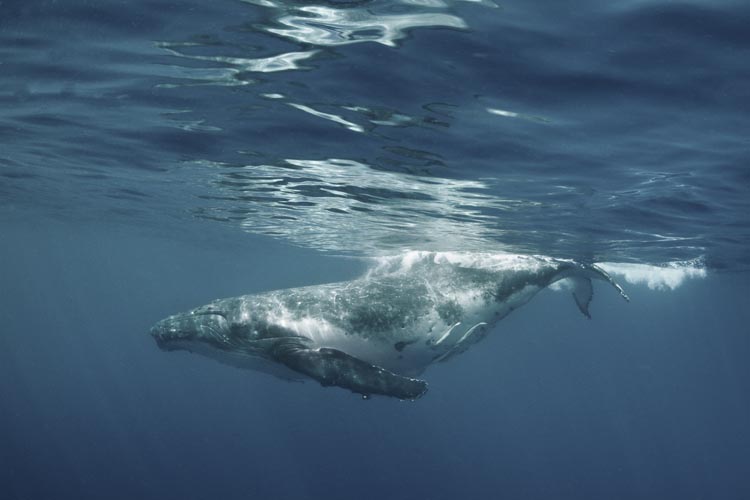 Saturday 10 September 2011 – It’s very still this morning, with a glassy sea surface- but the showers are back. We’ve got both skipper Al along with Ali working together to help make the most of the day. We encounter whales early- what turns out to be 3 pods on the move in the sheltered water between the main island and Hunga.

We choose to work with a juvenile, possibly a yearling that’s made the return journey to Tonga with mum after being born here last season and spending summer in the Antarctic. Mum’s now left him to the independant life. He’s lying around on the surface, lolling about, with what seems to be no particular agenda for the morning. Our first encounter is a lengthy one, he allows us a close look for a few minutes while he plays on the surface. Then he’s dives and we loose him in the dark water. He’s easy to spot from the boat as he’s spending lots of time just hanging out, doing the occasional pec slap and even a little breach now and again, but he’s in no hurry. We try for a few more drops, but one as successful as the first- he’s decided he doesn’t want to play any more, and he gives us the slip. Still playing around, he’s in his own blue world.

He’s led us out into the open, and Al and Ali decide to head back into the area we had seen the other pods. They spot a whale surfacing and diving in a regular pattern off Tu’ungasika. It’s probably a singer- a mature male whale announcing his presence to the rest of the humpbacks in Vava’u and beyond. I’ve encounter singers in the area before, it’s a natural amphithatre from where the whale’s signature song will be heard all around the islands. The crew pinpoint the place they think the whale will be hanging head down, fluke up 15-20 metres below the surface. I slip into the water to confirm, and sure enough, from the moment I enter the water I can hear the song and feel the low frequency vibrations of the whale song continue through my body. Away from the sound of the boat, I can even hear whale song with my head above the surface- he is very close. Although I can’t get a visual on him, I call the group into the water for there first experience of feeling the sound of a whale, and nobody is disappointed. The whale sound is reverberating through our bodies and we are now part of the sea.

By now Ali has found the source of the sound and beckons us over. Peering down into the depths, we can just make out the faint white outline of the whales pec fins. His countershading (dark pigment on top white underneath) is a perfect disguise. As we hang on the surface right above him, we feel all his range – from deep gutteral growls to bird-like chirps… and many in-between.

With whale song still filling the senses, we motor to the island Nuku for a quiet lunch and a snorkel on the seagrass beds, with their colourful anemones and resident damsels and anemonefish. Nuku is also home to a plot of garden eels, shy fingerlike eels that “grow” from holes in the sand.

The rain is coming in again- heavy now- as we head back to town for an early afternoon.