Back in port after Southern Wonders 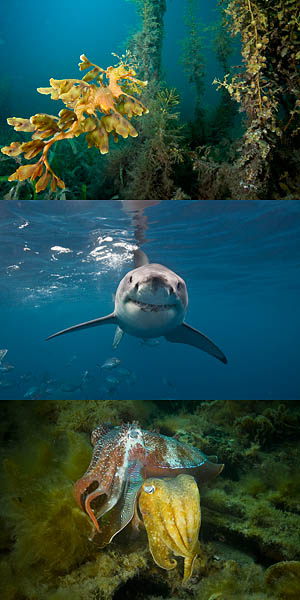 The sea off South Australia’s Eyre Peninsula really turned it on for the photographers who joined me on this year’s Southern Wonders tour with Rodney Fox Shark Expeditions.

We came together in the steel town of Whyalla at the head of Spencer Gulf to capture the annual aggregation of Australian Giant Cuttlefish off Point Lowly. An informal welcome dinner and a few pointers on what to expect from diving with the cuttlefish got us under way, and while dive day one dawned a little wet, by the time we were on the bus en-route the dive site, Whyalla was shining.

Spencer Gulf’s Giant Australian Cuttlefish rendezvous on this shallow rocky shoreline each year in what is thought to be the only breeding aggregation of its type on the planet. Over two hour-long dives the group was captivated as these masters of camouflage went about their complex rituals amongst the seaweed and rocky ledges just off shore. Most picture-success was had by those who chose a group to study and photograph as behaviours unfolded in the changing light.

An early start to get day two underway as we headed southward on the Lincoln Highway. It was a pretty quiet bus as the warm sun created the perfect environment for extra snoozing! By mid-morning we’d arrived at the jetty in time to see Princess II steaming in to meet us. On board the team met expedition leader Andrew Fox and the rest of the crew: Divemaster Jennifer “Tinker” Taylor; baitman Dirk; skipper Aaron; and most importantly, chef “Patto”. Before long everyone was gearing up for an afternoon with with the Leafy Seadragons. Much harder to find than the cuttlefish, these delicate creatures are one of the most beautiful animals imaginable. With the help of local knowledge and Patto’s spotting skills, over the course of the afternoon 3 specimens were located within reach of the boat. Given the delicate nature of these animals, the dive/photo brief included some tips on dragon-shooting etiquette: very low strobe power; shooting test exposures before lining up the animals; and the recommendation to limit the number of shots that each photographer would take. The last divers exited the water on dusk and soon after our skipper had Princess II under way, next stop the Neptune Islands!

We awoke in Main Bay on the morning of day three in the heart of Great White Shark territory. We had sharks checking out our baitman Dirk on the back platform before breakfast, and photographers in the surface cage at first opportunity. Throughout the morning we had visits from a number of animals, including a very large, unrecognised female at least 5m long, and everyone had the chance to see her and her friends up-close and personal. After lunch the bottom cage was deployed to visit these awesome creatures deep in their realm.

Seeing the shark-world below 20 metres is possible only with Rodney Fox Shark Expeditions. They pioneered surface cage diving with Great Whites over 40 years ago, after Andrew’s father Rodney survived a Great White attack while spearfishing. Wanting to learn more about these awesome creatures led to the development of bottom cage diving, where a 4-diver cage is lowered to the sea floor from Princess II.

At depth Great Whites have a different character to when they are on the surface, with not just their power, but their grace and majesty also on display. Along with the usual rigours of underwater photography, shooting from a shark cage has its unique challenges– restricted angles, dealing with difficult sea conditions, surge and visibility issues. But the group rose to the challenges, with some great images being captured during our four days of nearly constant shark action at the Neptunes.

On our last day, with the weather closing in, Andrew and Dirk worked together to tag two new sharks with acoustic tags that will plot their movements around the coastline, part of ongoing data collection in collaboration with researchers from the CSIRO.

Although sea and weather against our sea lion swims, the inaugural Southern Wonders photo expedition is complete! I’d like to thank all our participants and crew for their enthusiasm and camaraderie amongst the amazing marine life of South Australia.

If you’re interested in next year’s expedition, drop us a line and we’ll keep you informed of plans.